Sheffield Wednesday have been relegated to League One after drawing 3-3 with Derby County on the final day of the Championship season.The deciding game at… 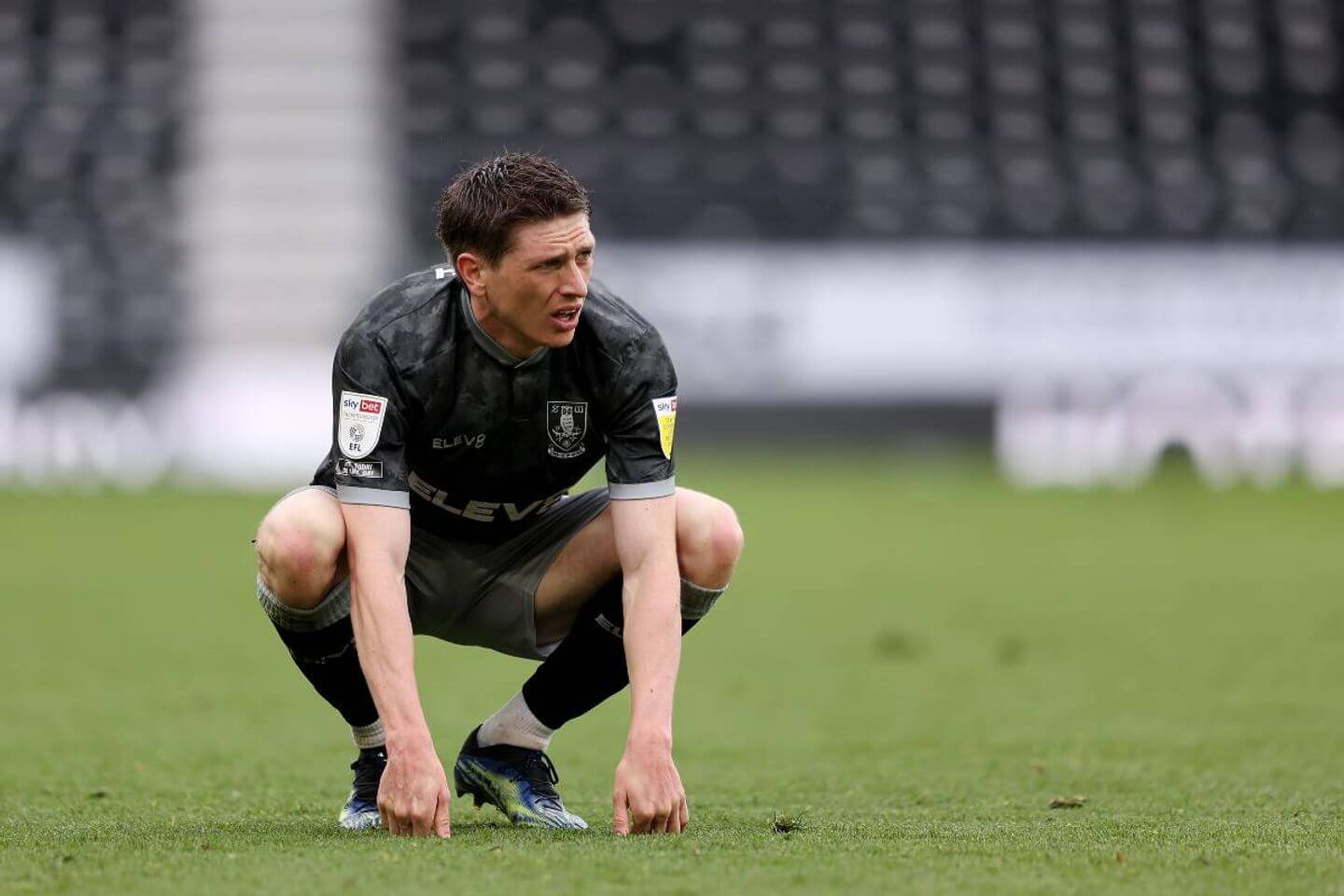 Sheffield Wednesday have been relegated to League One after drawing 3-3 with Derby County on the final day of the Championship season.

The deciding game at Pride Park had everything and Wednesday twice led Derby, but a 78th-minute penalty from Martyn Waghorn to level the scores proved to be the decisive moment in the game.

It has been a tumultuous season at Hillsborough, with Wednesday sacking both Garry Monk and Tony Pulis before appointing current manager Darren Moore in March. Moore had been on leave after developing complications from COVID-19, but returned to the dugout for the Derby game.

A Wednesday win would have kept them up after Rotherham drew 1-1 against Cardiff, but they were ultimately undone by off-pitch factors — without their six-point deduction for breaching rules surrounding the sale of Hillsborough they would have stayed up.

Derby thought they’d gone ahead through Colin Kazim-Richards early in the first half, but his effort was correctly ruled out for offside. Wednesday then took the lead in the first-half added-time, as Sam Hutchinson poked in from close range.

The hosts then equalised through a Waghorn header just after the break and took the lead just a few minutes later through Manchester City loanee Patrick Roberts.

Callum Paterson then made it 2-2 as he made the most of an error from Derby’s Craig Forsyth, and Julian Borner then put Wednesday ahead on 69 minutes with a close-range header.

The crucial moment then came less than 10 minutes later, when Chey Dunkley fouled Kamil Jozwiak in the box and Waghorn added his second from the spot.

Rotherham, having led for 80 minutes at Cardiff, failed to beat the drop after Marlon Pack equalised in the 88th minute.

Wycombe Wanderers needed a miraculous 12-goal swing on the final day, and while a shock 3-0 win at Middlesbrough saw them climb to 22nd, it was not enough to keep them up.

Those results saw Wednesday finish the season at the bottom of the Championship table.

It has been an incredibly unsettled season at Sheffield Wednesday with three permanent managers — Monk, Pulis and Moore — since the start of the campaign.

Staying up was always going to be a challenge after they started the season on minus 12 points after they were found to have breached the EFL’s sustainability rules. After an appeal, this was later reduced to six points.

There has also been plenty of disappointing football on show. So far this season they have only managed 12 wins and lost crucial games against relegation rivals Rotherham United and Wycombe Wanderers among others.

This will be Wednesday’s first season in League One since 2012 and will likely see a much-changed side in the third tier.

A number of senior players including Adam Reach, Tom Lees and Jordan Rhodes are out of contract and it remains to be seen whether they will commit to the club for next season.

There is also some uncertainty over the future of manager Moore with his contract length currently unknown, although it is expected to run beyond the end of the campaign after he left Doncaster Rovers in March.

For the full story on Wednesday’s fall from grace and the issues that extend beyond Saturday’s gutting result, Go Deeper with The Athletic below.

Wednesday’s players have allegedly not been paid for April – is it any wonder their performances have not been up to scratch this season?

Failing to beat ten-man Bristol City says it all about Wednesday’s predicament – is there any fight left?

BROUGHT TO YOU BY

Rotherham United were condemned to League One football after Derby County drew 3-3 against visitors Sheffield Wednesday on Saturday afternoon at Pride Park in the Sky Bet Championship. The Rams secured safety as results went in their favour, with Cardiff City drawing 1-1 at home against Rotherham United. 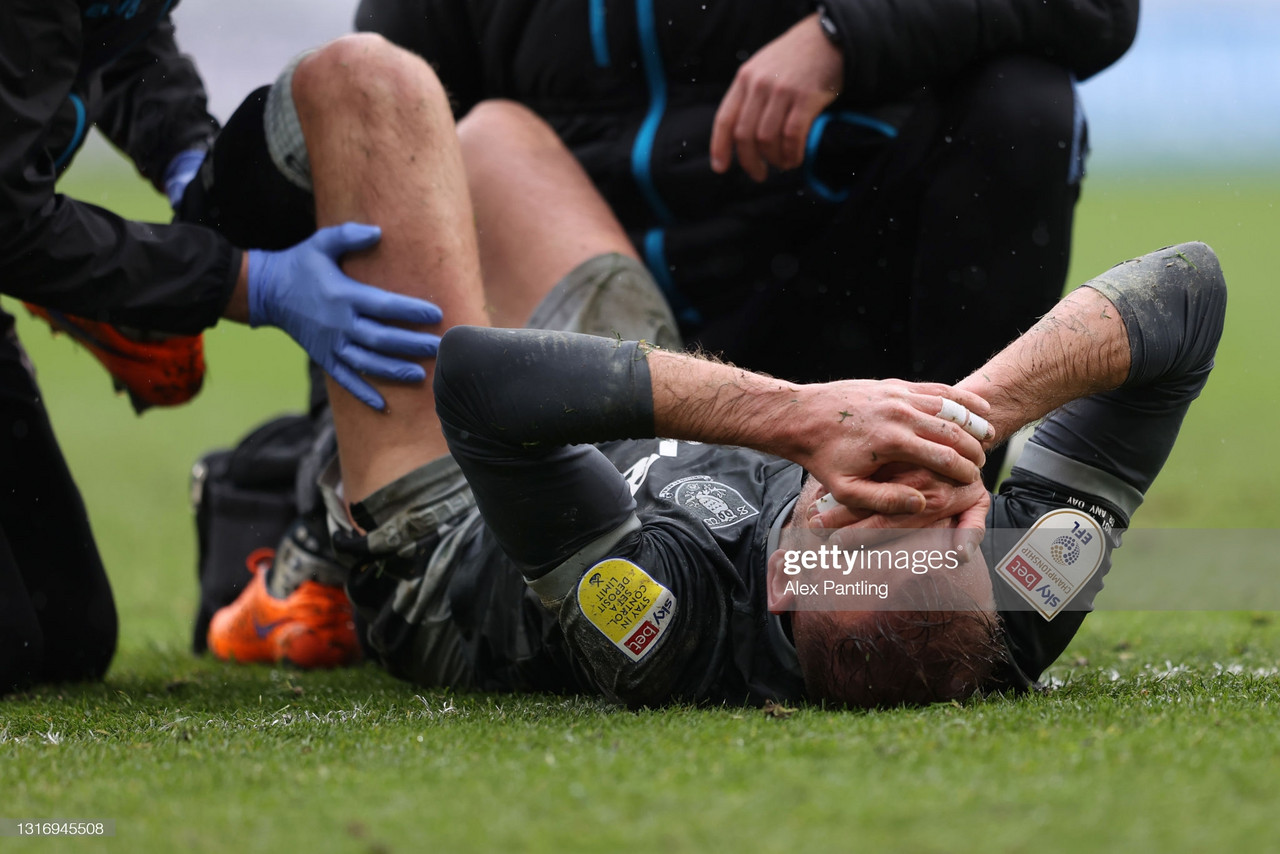 Derby County drew 3-3 with Sheffield Wednesday at Pride Park in the final game of the season for both sides.

The draw, with results going for Derby elsewhere, ensured the Rams’ safety in the league meaning they will be playing Sky Bet Championship football once again next season.

In a massive game in the bid for survival, the contest was full of goals with an evident physical battle for both sides. Martyn Waghorn suffered an early blow as he looked to get on the end of an inticing ball, only to head wide at the far post, colliding with the woodwork too and requiring medical attention from both sets of staff.

Sam Hutchinson opened his account on the brink of half time as a long throw from Callum Paterson was flicked on by Julian Borner, Jordan Rhodes on target with a header which was saved, but Hutchinson was there to finish on the rebound.

Derby must have been fired up by Wayne Rooney at half time  as they came out all guns blazing, Waghorn the beneficiary for the Rams as his accurately headed goal put Rooney’s men back in contention. Patrick Roberts put Derby ahead for the first time in the game in the 52nd minute as he was on the end of a brilliant ball by the ‘keeper, as the ball was flicked on through to him, the number 23 then curled the ball into the back of the net, giving Keiren Westwood no chance.

In a fantastic game for the neutral, the visitors instantly equalised, Paterson punishing a poor touch by Craig Forsyth as he drilled the ball into the left hand corner of the net to dampen the Derby delight, as they found themselves back in the bottom three once again. Forysth was unable to see the ball until he presented the chance to Paterson, unable to react and clear his lines.

Following the goal from Wednesday, Derby were pegged back again as  Borner headed Wednesday into the lead, good work to keep in the ball from a tight angle from his teammate Chey Dunkley allowed the ball to go into the box to put the visitors ahead.

But Derby would have the last laugh in the contest as they were awarded a penalty in the 77th minute, Kamial Jozwiak was brought down by Dunkley as Waghorn stepped up and buried the penalty into the top left hand corner to put the game on even terms.

Derby were helped in the late stages as Cardiff City levelled at home to Rotherham United to ensure the Rams finish the season outside of the relegation zone.

Martyn Waghorn started the game with a hit to the chest as he looked to get on the end of a header, but was pivotal as he played himself into the game after the early set back. His two goals in the 49th and 78th minute proved to be vital in Derby securing a point and ultimately survival. Known for his aerial threat, he was on the end of a header which was directed into the right hand corner, as his performance got Rooney and his men out of trouble, securing another season of football in the second tier.

After a slow start from the hosts, Sheffield Wednesday found a way back into the game at important moments, they found it difficult to keep hold of their lead though as Derby kept throwing their own challenges at their defence. Although Wednesday showed a great deal of fight, grit and determination, a point was not enough.

The Owls ideally needed to win to have any chance, whilst relying on the result in the Cardiff versus Rotherham game to go in their favour.

Man of the Match – Martyn Waghorn

A well deserved award for the number nine as he made sure he continued the game and did a job for the team after an early injury suffered in Wednesday’s penalty area. He was a thorn in their side, always working hard and showing his brave nature off the ball. Rooney knows his influence on the team, and how important he will continue to be for the team next season.